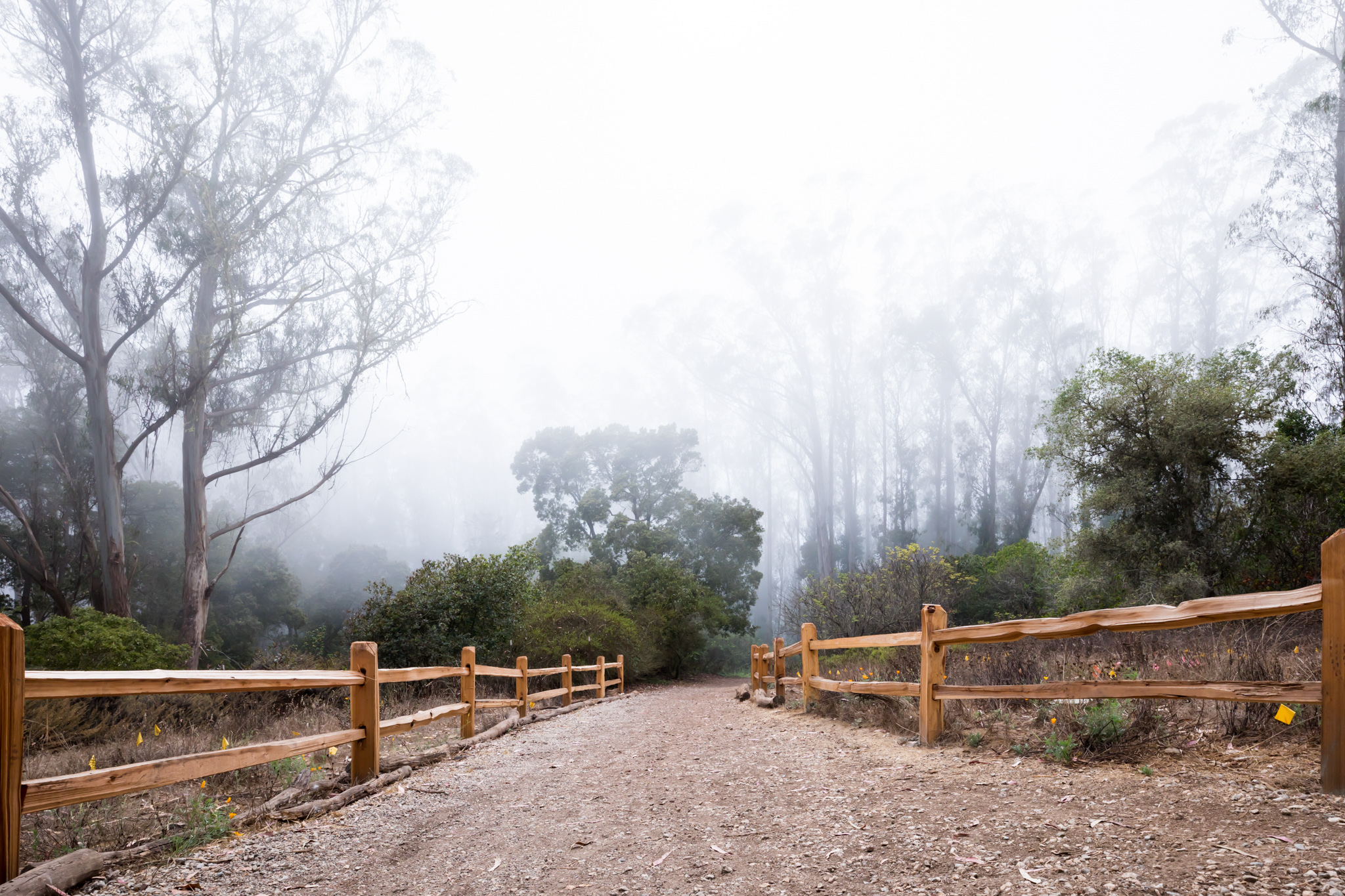 In the heart of San Francisco, there is a place so serene you can’t hear the honking of car horns or the ringing of cell phones or the chatter of daily life. In place of skyscrapers, towering eucalyptus trees are blanketed by a dense fog. It’s a marvel to look up and see an occasional leaf twirling down from nothingness. The crevices of the mountainside dive steeply downhill and are shrouded in varying shades of green and brown from the array of flora. The air smells of fresh dew and branches whip, crack and snap from the wind. It’s almost strange this place exists dead in the center of a metropolis like San Francisco.

For many folks, my parents included, the Mount Sutro Open Space Reserve was a saving grace during the hardest months of the pandemic. It was a place where San Franciscans could experience immense nature without leaving the city. It was a place where we could speak to strangers again, albeit from a distance, because we were outside and had a shared talking point other than COVID: the beauty of this hike. After living in New York City from the fall of 2019 through December of 2020, I was yearning for any sort of escape to nature when I moved back to San Francisco in January.

But the site nearly disappeared in the 2010s. As early as 2013, UC San Francisco wanted to thin some of the non-native eucalyptus trees, citing that it would reduce the fire hazard as droughts caused them to be less healthy. According to the San Francisco Examiner, “non-native plants and unhealthy trees would be pruned, vines would be removed up to a height of 10 feet and trees would be thinned out to allow for 30 feet between trunks.”

But residents living around the area and environmental advocates immediately fought back. The opposition group argued the plan “could damage soil stability, increase exposure to light, increase fire hazards and impact water runoff in the forest.”

Since the UCSF only has to respond to the UC Board of Regents, some of the trees were eventually removed. With the help of arborists, UCSF began trimming nearly a quarter of the 61-acre forest in late 2013. The removal of approximately 1,200 trees was required so that Cal Fire would have the space necessary to fight any blaze within the forest. Key to the plan was pruning trees close to important UCSF structures, including student housing buildings and a water tower.

After this favorable outcome, UCSF put forth a comprehensive plan to “ensure the long-term health and sustainability of the Reserve.” It was approved in 2018 and would be implemented in three phases over the next 20 years. The plan includes the removal of unhealthy trees close to trails and buildings, controlling vines and shrubs that are considered invasive and planting a mix of 75{dac91165b6340c9edeec0f6e2d04ed490d9db9cd48de0ecdc68b2bbb63f2327e} new eucalyptus and 25{dac91165b6340c9edeec0f6e2d04ed490d9db9cd48de0ecdc68b2bbb63f2327e} new native trees.

In March, UCSF hosted a community meeting to update the public on the progress of the vegetation management plan. However, opposition continues, as the most recent post from a blog that opposes this plan was titled “Destruction of Sutro Forest Likely to Accelerate” and was published in January.

Regardless of what side of the trail you may stand, the Mount Sutro Open Space reserve is still immensely rich with wildlife that needs to be appreciated up close and personal. The mountain offers six trailheads that weave and wind from top to bottom and east to west with paths that enter and exit at completely different parts of the city. To recall the hike that my parents did so often in 2020, we hiked it once again this past week.

We started at the Fairy Gates trailhead which is located next to the Aldea San Miguel housing complex off of Clarendon Ave. The dirt was dry. Nuts from the eucalyptus tree (known as gum nuts) rolled down the path as I kicked them like a soccer ball. After zigzagging our way down the hill, we eventually crossed Medical Center Way, a street, and continued our meandering uphill along the North Ridge Trail.

There were few people on the hike that day. Maybe because people were still at work. Maybe it was too hot and the forest didn’t have that rainforest aura that it normally has. I missed that interaction of the small talk with strangers as we passed each other.

We made it to the top of Mount Sutro and sat on the benches to rest, staring at the sprawling city. It was still quiet. Peaceful. We took it in, unhurried, because we knew our focus was to be heightened again on our walk downhill back to reality.

As we got in our car to leave the wind flung a few of those gum nuts that landed with a mild thud on the windshield, like a friendly knock on the door. The trees above us swayed back and forth, as though they were waving goodbye. “See you soon,” I thought to myself as we drove away.